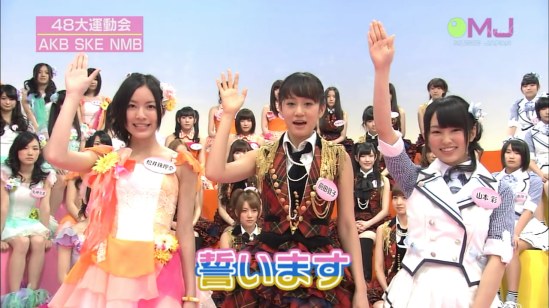 Over the last few weeks’ episodes, AKB48 along with their sister groups, SKE48 and NMB48, have appeared on the television program MUSIC JAPAN. During that time, the three groups have competed against each other in a short mini sports competition. In short, NMB did quite well. In particular, Yamamoto Sayaka (Sayanee) was amazing throughout the competition.

In the first MUSIC JAPAN episode on May 20th, the first competition was a simple race. Run to the bread attached to the string, grab the bread with your mouth, and run to the finish line. Time stops when all  members cross the finish line. The AKB team goes first with a lineup of Takahashi Minami (Takamina), Kojima Haruna (Kojiharu), Itano Tomomi (Tomochin), and Shimazaki Haruka (Paruru). Kojiharu has problems getting the bread and the team finally finishes with a time of 18.14 seconds. SKE goes next with a lineup of Hata Sawako (Shawako), Ogiso Shiori (Gomatan), Kizaki Yuria (Yuria), and Takayanagi Akane (Churi). Like Kojiharu before her, this time Ogiso struggles with the bread, but SKE finishes with a time of 16.95 seconds, ahead of AKB’s time. NMB goes last with Watanabe Miyuki (Milky), Sayanee, Tanigawa Airi (Airi), and Yoshida Akari (Akarin). They breeze through without any issues and finish in a mere 8.94 seconds. NMB takes the lead with 20 points.

Next up is a relay race. Four members race while holding onto a long baton, complete a few turns around some cones, and hand off the baton to four more of their teammates to complete the few turns and return to finish line. The NMB girls of Sayanee, Kinoshita Momoka (Kinoshita), Yogi Keira (Keira), and Jo Eriko (Jo) get off to an early lead. They hand the baton to Milky, Kadowaki Kanako (Kanakichi), Hikawa Ayame (Ayanyan), and Yagura Fuuko (Fuuchan), who easily finish the race in 1st place. Another 20 points for NMB.

From the May 27th episode, the next competition is a game that resembles curling. The girls toss weights toward a target, trying to get the weight closest to the center as possible. Weights in the outer most circle are worth 1 point, in the inner circle 2 points, and touching the center 3 points. The NMB team for this competition is made up of Sayanee, Milky, Shiroma Miru (Mirurun), and Kondo Rina (Riichan). The biggest moment of this contest occurs after Shinoda Mariko pushes out NMB’s weight from the center. On the next turn, the captain Sayanee comes up and pushes AKB’s weight out with an incredible toss and puts NMB’s weight back in the center. Ultimately, AKB and NMB would end this contest with 3 points each. But the tiebreaker would go to the group with the weight closest to the center, giving the win to NMB.

The final competition is an egg-carrying relay race. Takamina decides to run her part of the race barefoot, which I really think was a bad idea. Milky would start the race off for NMB, holding close to 1st place before passing the egg to Ogasawara Mayu (Maachun). Maachun would hold pretty steady, gaining and losing a lead. Jo would eventually get the lead back and make a small gap away from SKE and AKB. The anchor, Sayanee, would close the show in style, with an impressive run to finish ahead of SKE’s Matsui Jurina (Jurina) and AKB’s Takamina.

Game, set, match, NMB! So happy to see them do so well. It would be nice if, like convenience93 suggested, there was a sports episode of Shukan AKB between the three groups (and maybe 4 or 5, if we include HKT48 and Nogizaka46, which would be awesome). I’d watch that.

2 responses to “My Pure·Delight – NMB Domination on MUSIC JAPAN”