2012 was definitely a very successful yet emotional year for NMB48 and their fans. We saw 15 NMB members graduate along with the introduction of the new 3rd and 4th generation members. We saw the numbers of teams triple with the creation of Team M and Team BII. We saw five NMB members rank in the AKB’s 27th single election. We saw AKB48 Team A member Yokoyama Yui (Yuihan) transferred into the group and placed in Team N.We saw NMB dominate G+ with their antics and mayhem. We saw NMB release 4 great singles. We saw how awesomely funny NMB could be in Geinin!. And we finally, finally got NMB LODs for us fans to enjoy NMB in all their stage-worthy glory. And I probably missed something amazing that happened to NMB in 2012.

I’m hoping that 2013 is an even bigger year for the group. NMB already announced their releasing their 1st album scheduled for release on February 27th and that NMB will be getting their own Request Hour sometime in 2013. Of course, I have my own personal hopes and wishes for the group for 2013. My completely biased short wish list for 2013 after the jump.

After Jo Eriko’s (Jo) unexpected graduation, my Team M oshi has become the captain of Team M, Shimada Rena (Shimarena). I’ve said before that NMB senbatsu needs more Team M (and now Team BII as well) members to balance out the Team N-heavy senbatsu and I think Shimarena would be a great addition to senbatsu. She seems to be close to if not the 3rd most popular M member after Yagura Fuuko (Fuuchan) and Tanigawa Airi (Airi). She’s managed Team M well through all the graduation turmoil. And she was chosen for the lineup for NMB’s B-side song HA!. I would absolutely love to see her in senbatsu for NMB’s 7th single. 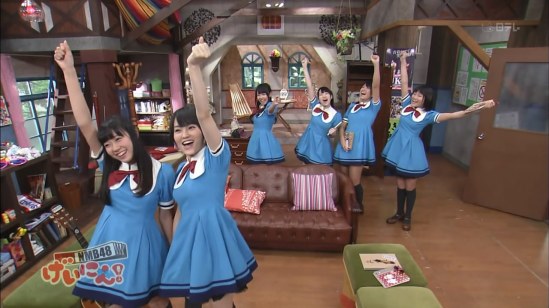 I think with Naniwa Nadeshiko and Geinin! that NMB has shown that they excel in TV shows. Right now, NMB really only has Teens no Hakusho and Docking48! and I feel that NMB needs another TV show. Another season of Naniwa or Geinin! or a completely original NMB TV show would be more than welcome. Maybe make a drama series based on the setting of the Virginity story PV?

A bit of info that people might not know about me: the thing I hate most in the 48 universe is Majisuka Gakuen. I just despise the series and I hope it ended when Majisuka Gakuen 3 finished. What does this have to about NMB? If a 4th season is announced, I’m scared that it will feature NMB members. And it will make me go crazy that my favorite idol group is on a TV series I can’t stand. I know it will be a good chance for NMB members to act, but I’m selfish. Just give them the Virginity drama series that I asked for above.

After the successful releases of Yamamoto Sayaka’s (Sayanee) and Watanabe Miyuki’s (Milky) photobooks, I would love to see one for my NMB oshi, Yamada Nana (Nana). She’s absolutely beautiful, so I think this idea explains itself.

I remember when I was opposed to seeing sister members “invading” AKB’s election. Yeah, I’ve changed. Along with the five NMB members who ranked last year, I’d love to see even more members ranking in the Top 64. Maybe Yoshida Akari (Akarin), Yagura Fuuko (Fuuchan), or Yabushita Shu (Shuu) could take a spot in Next or Future Girls.

I miss her so much.