In just under two months from now, on August 8th, 2013, AKB48’s 32th Single Senbatsu Election will be taking place. The election will determine the Senbatsu (Rank #1-16), Undergirls (Rank #17-32), Next Girls (Rank #33-48), and Future Girls (Rank #49-64) for the 32th AKB48 single. It will be the 5th General AKB election overall, my 3rd election since I’ve joined the 48 fandom. And for the most part, I’m feeling a little apathetic towards the whole election. I don’t know if I can bring myself to care as much for this year’s election as I have for the previous two years. That said, when the election comes around, I’ll probably be my same anxious self awaiting the results, hopeful for favorable results.

Of course, as a Minegishi Minami (Miichan) oshi, I hope she does well in the election. I don’t expect her to keep her senbatsu position, but I don’t see her falling any lower than Undergirls. No matter where she ranks, I’ll be proud of her and I hope we’ll be able to see her smile when she gives her acceptance speech. And yes, she will be getting some votes from me.

Also, as a NMB fan, I’ll be rooting for them to rank up and rank often in this election. Among the NMB members, Team N member Kishino Rika (Rika-nyan) and Team M members Koyanagi Arisa (Arii) and Yamamoto Hitomi (Hitomin) will not participate in the election, along with Team N graduates in the near-future Fukumoto Aina (Ai-nyan) and Shinohara Kanna (Kanchiru).

It seems pretty secure for me that the five NMB members (I’m including Yuihan here and excluding Ai-nyan here) who ranked last year will do so again. I see Yokoyama Yui (Yuihan) holding down her position in senbatsu. I expect both Watanabe Miyuki (Milky) and Yamamoto Sayaka (Sayanee) to challnege for senbatsu and ultimately I think Sayanee will make join Yuihan in senbatsu. I think Yamada Nana (Nana) will jump from Next Girls up to a Undergirls position and  Ogasawara Mayu (Maachun) will take her Next Girls spot, moving up form her Future Girls ranking last year.

As for new NMB entries in the election this year, I see Yoshida Akari (Akarin) and Yagura Fuuko (Fuuchan) as the most likely members to be added in. When Zetsumetsu Kurokami Shoujo cames out, Akarin was originally a Top 5 NMB member, so I’m hoping to see her rank. And after Jo Eriko (Jo) and the rest of Team M didn’t rank last year, I can see the finally pushed once again Fuuchan grabbing a Future Girls spot. I’m also hopeful that maybe concurrent AKB and NMB member Kotani Riho (Ripopo) and Team BII ace Yabushita Shu (Shuu) can jump into the rankings. And lastly, I’m rooting for my NMB oshi, Shimada Rena (Shimarena). Like Miichan, Shimarena will be getting my votes as well.

Time to purchase some voting tickets (comes with a AKB single), I guess.

Pics of the participating NMB members after the jump.

END_OF_DOCUMENT_TOKEN_TO_BE_REPLACED

Spring is the air and what better way would there be to celebrate than to go cherry blossom watching with the NMB girls. Enjoy the newest video from NMB48’s official YouTube channel.

And finally, I have decent internet connection again. So much has happened in the world of NMB48 since my internet went down. Shinohara Kanna’s (Kanchiru) graduation announcement. The end of Docking48! and Teens Hakusho. A new NMB TV show called Black Million. Everything involving Geinin! 2 and the Geinin! movie. And probably a bunch of other things I can’t think of right now. I definitely believe that it’s never been more fun to a NMB fan than right now.

And three weeks from now, the group will be holding their own Request Hour Best Setlist 2013 Best 30, counting the top 30 NMB songs (and stage songs, which are technically AKB songs because Aki-P keeps delaying N3) as voted by the fans. The voting tickets for NMB’s Request Hour were placed in the Type-B edition of NMB’s 1st album, Teppen Totande!. And I still have my unused voting ticket from my Type-B copy, trying for weeks to solve this dilemma (the kind of dilemma I actually enjoy) I’ve been dealt with. What NMB song do I vote for?

I decided to limit my choices to NMB songs, so no AKB stage songs for me. And I feel that all of A-side single tracks will rank, so I wanted to avoid voting for those songs as well. Ultimately, I think I have three final songs in which I will choose from to give my 1 vote.

Those three songs after the jump.

END_OF_DOCUMENT_TOKEN_TO_BE_REPLACED

I got my copies last week and I’m really enjoying everything about the album types. The songs, the concert footage, the full HA! PV. So much NMB goodness. So happy and proud of NMB and hopefully this album is only the tip of the iceberg in terms of success for the group. Congratulations, NMB48!

And it looks like the album is going to be another great seller for NMB. Oricon shows the 1st day sales of album have totaled 247,047 copies, ranking it 1st on the Oricon daily album chart. When I first heard that NMB was getting their 1st album, I couldn’t even think of a ballpark estimate figure that the album would sell. But seeing 247,047 copies of the album sold on its 1st day alone is pretty amazing to me. It certainly makes me feel very proud of NMB and extremely happy for their success. Can the group reach 300,000 copies sold for the week? Or maybe even more? We will find out as the week goes by. Congratulations, NMB48! 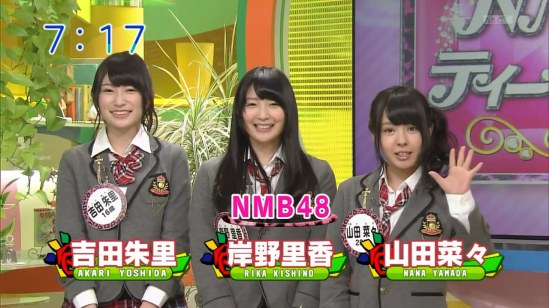 Another week, another superb episode of Teens Hakusho. This week’s episode features Team N members Yamada Nana (Nana), Kishino Rika (Rika-nyan), and Yoshida Akari (Akarin). And this week, we see the girls hit the slopes for some snowboarding and other winter fun.

From my own experience at the slopes, I know how difficult it can be to snowboard. In my case, it’s seemingly impossible. So this episode would be amiss if we didn’t have at least one NMB member with some snowboarding skills and that member of the three is Rika-nyan. Rika-nyan glides down the slope in style, making it easy to see that this isn’t her first time on a board. Let’s just say Akarin and Nana don’t have the same skills as Rika-nyan, but damn do they look cute looking scared trying to learn to ski and snowboard, respectively. But all the girls are able to successfully glide down from the top of the slopes and in one piece.

And the main event of the episode is to see if Rika-nyan can successfully land a jump from a ramp on her snowboard. It’s not as easy as SSX and Cool Boarders makes it look and Rika-nyan struggles to land that ollie off the ramp. She lands short a few times and is unable to keep balance after the jump. But finally, after a few more tries, success… 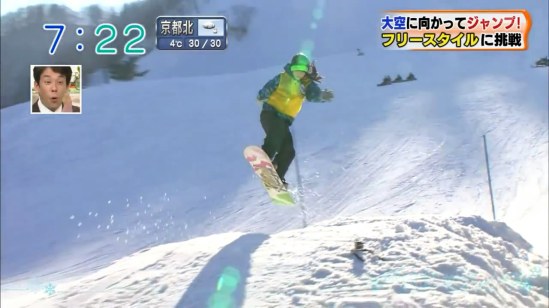 Awesome episode and Rika-nyan was definitely the MVP of the episode. Mad props for her snowboarding skills.

By now, I think most NMB fans have heard the news about Fukumoto Aina’s (Ai-nyan) graduation. At the end of yesterday N1 stage performance, Ai-nyan announced she will be graduating from NMB48 in the near future to pursue her dream of becoming a variety talent.

When I first heard of the news of Ai-nyan’s graduation yesterday, I had the same devastated feeling I had when Jo Eriko (Jo) announced her graduation back in September of last year. But as the day went by and I thought more about it, I realized that I had this strange sense of pride in Ai-nyan for making such a difficult decision to pursue her dream. You could see the tears in Ai-nyan’s eyes as she made her announcement and you could see how strongly she believes in her dream. Of course, I’m going to miss seeing Ai-nyan, one of the crown staples of NMB, leave the group. But if it’s to pursue her dream, I support Ai-nyan 100% and I know she can definitely succeed in being a variety talent.

Ai-nyan graduation announcement has inspired me to remember my own dreams in life and to go after them with everything I’ve got. Thank you, Ai-nyan, for inspiring me and being completely awesome in NMB. I hope to see you as a variety talent on TV for a long time to come.

There are not many details about the movie itself and I’m left with so many questions. What happens to Jo Eriko’s character after Jo’s graduation last year? Do we see the return of all the NMB guesting members such Yoshida Akari (Akarin), Yagura Fuuka (Fuuchan), and Kishino Rika (Rika-nyan)? Do we see Football Hour return? Will the movie contain any improv comedy like in the TV show? Will Yamada Nana (Nana) finally manage to get some laughs?

Endless possibilities to think about. All I know so far is that I’m tremendously excited for this Geinin! movie. With the full HA! PV coming soon and now this, it seems like the acting bug is coming for the NMB members. And I love it.

Happy Valentine’s Day everybody! And just like their Christmas video, NMB is helping once again to celebrate the holidays, this time by uploading a special Valentine’s Day video on their official YouTube channel.

I loved the Christmas video and I’m really happy that NMB did another video for Valentine’s Day. The video is just fun and it’s really great to see each NMB member with their own unique spin on a Valentine’s day confession. So much variety between all the members. And who wouldn’t want to receive some chocolate from these girls on Valentine’s Day?

And once again, Happy Valentine’s Day!

It’s been a crazy time being a ***48 lately and with all the craziness going on in the fandom, I wanted my first blog post in over a month to be on something simple.

NMB enjoying crab legs, KFC, sweets, and more makes me happy. I envy the girls for being allowed to eat so much delicious food. Not much to explain about the episode really. If you love NMB and you love food, watch this episode and you won’t be disappointed. NMB food pic spam after the jump.