Just a short post. Winning the janken tournament didn’t just give Shinoda Mariko (Mariko-sama) the center for the 24th AKB single. It also gave her the center of the Puccho candy CM. As expected, the short Puccho CM featured mostly Mariko-sama talking to the viewer about Puccho with a even short dance with the Ue kara Mariko senbatsu. Probably my biggest problem with the CM is that Mariko-sama’s talking to the viewer interrupts the song, never allowing Ue kara Mariko to make any impact. I’d prefer if the song just played continuously through the CM, even when Mariko-sama talks. Also, wished the CM was longer to catch more glimpses of the senbatsu members. Still, not a bad CM. 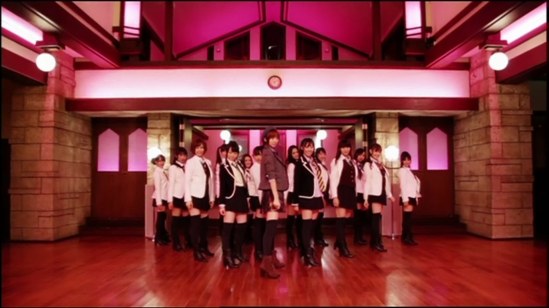 Since I’ve become a fan of AKB, there have been three singles released. Those three singles are Everyday, Kachuusha, Flying Get, and Kaze wa Fuiteiru. I haven’t been high up on the PVs for these three songs.  After seeing the PV for AKB48’s 24th single, Ue kara Mariko, I think I have finally found the AKB48 PV I love. I love this PV so much.

END_OF_DOCUMENT_TOKEN_TO_BE_REPLACED

It looks as though the title of AKB48’s 24th single has been titled Ue kara Mariko. The 24th single features the senbatsu members decided from the recent janken tournament, which was won by Team A member, Shinoda Mariko (Mariko-sama). Really excited for this single because I really love the senbatsu members especially with Minegishi Minami (Miichan) and Fujie Reina (Reinyan) being close to the center. Can’t wait to see how this single turns out.

EDIT: The tracklist for the single has been posted on the King Records website. The B-side song is Noel no Yoru accompanied by either Injin ha Kizutsukanai (Team A), Zero Sum Taiyou (Team K), Yobiatte Fantasy (Team B), and the song that was originally intended to be the title 24th single song, Hashire! Penguin (Team 4).

The janken tournament to determine the senbatsu and center for AKB48’s 24th single was held two days ago on September 20th. The tournament was ultimately won by Team A member Shinoda Mariko (Mariko-sama). I’m happy for her and her chance to be the center for a single for the first time. But I’m even happier on how the rest of the senbatsu ended up.